March 06, 2017
We purchased a new Lowrance Link-5 radio shortly after getting Bandit last year and along with that was a 1.5m VHF aerial which we mounted to the starboard side of the radar arch. Over the year that we've had Bandit, we've realised that this 1.5-meter aerial looked a bit small aesthetically and only stuck up above the boat by half a meter. I've done some research and we've found that it's a little on the small side (practically) anyway. Today I purchased a new Banten 2.7m aerial from the marina's chandlery and fitted it.

While fitting the new aerial I found a very old, corroded connector a little further down the wiring of the VHF Coax cable which must have been the one Sealine fitted from factory in 1991. This was so badly corroded that we couldn't undo it but had to cut it off and must have been having a dramatic effect on the signal we were transmitting and receiving through the aerial. It goes without saying that we cut it off and put a nice new connector in its place. So, now we have a larger aerial that sticks above the boat by a good two meters and we've removed something that was most likely causing a large loss of signal anyway through the coax cable.

The aerial was £64 and we kept the original nylon aerial base from when we fitted the previous aerial back in January 2016. We did have to tighten the nylon base locking mechanism up a bit as it was struggling to carry the weight of this new aerial. It's all sorted now and works a treat!

Very happy with the result and the new aerial will do us well when we hit The Wash in May! Bandit also looks a lot better having a larger aerial in my view. 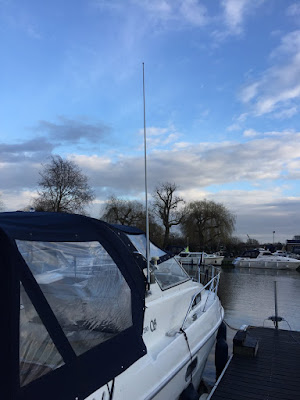