February 10, 2017
While we were at London Boat Show in January, we saw the Haines 26 on show which has some rather nice decals on the bow in mirror effect chrome.

We're definitely keeping the name as renaming her would just be wrong and we really do like the name 'Bandit'. It has something about it that just feels right, for whatever reason that might be. The current font used for Bandit's name decals is 'Vianta' which is the same font that Sealine used back in 1990 for their brand identity (as shown in an image below). It seems a shame to not use this font due to it's relevance to our Sealine being a 1990 model but a newer, cleaner font is far more modern and will look nicer in our opinion. 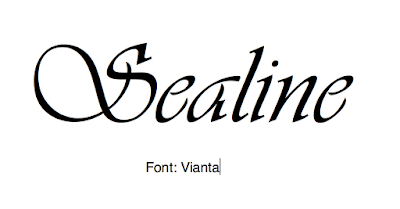 So, we're looking at the website Funky Money Boat Names who seem to be the only online company who do this chrome lettering. We'll probably get the name done in the very plain font, 'Arial' (a very recognisable font) and in flat chrome lettering. The overall measurements are shown in the below picture and are similar to the letting size currently on Bandit's hull. The decal will come to £18.72 (per decal) so a total of about £40 for the pair. We will also get another smaller one for the transom and another done in saying 'St Ives' to show where Bandit is based. 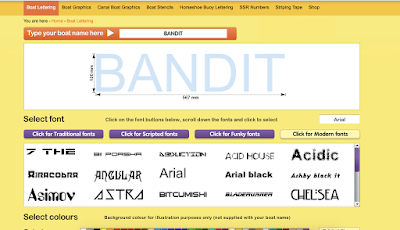 We're hoping that the chrome will show up against the white hull but we plan to order just one to see what it looks like before buying the whole lot. A final bit of measuring has to be done before we place our order for the test one. Fingers crossed that they look good!