January 04, 2017
A couple of updates for the blog and for Bandit. We purchased a set of new triangle anodes for Bandit's 290 outdrives from Keyparts not too long ago and today they arrived. We'll be very honest here but when we had Bandit transported back in January 2016, we removed the zinc anodes that she had on for the salt water down in Chiecher Harbour and replaced them with new magnesium ones for our fresh water river. Becuase we had never really done much research on the new 290 drives (our previous boat had 280 single prop drives) we didn't actually realise how many anodes there were. So all this time, Bandit's been wearing two zinc triangle anodes. I don't think this does any hard but I'm glad we spotted it before she went back in. 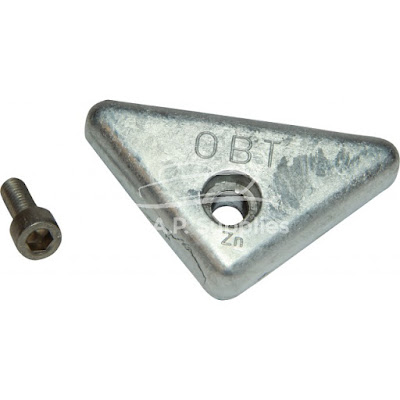 Secondly, we've spoken to the marina about the bad hydraulic leak on the starboard outdrive. From what I could see with my phone torch and a mirror, it appears that the leak is coming from one of the two hydraulic hoses themselves. The mechanic points out that it's more common for the ram to leak but I felt around the ram itself and it all felt dry. The hydraulic fluid was leaking down the hose and dripping from the bottom. So I guess it's either a split hose or a loose thread somewhere. Not sure yet as we can't really have a look without properly removing the drive. Anyway, we've had a couple of calls with the marina and it looks as if they are going to just replace the hose and see what happens. We've said that it can be done without the drive removed (information from the fantastic and knowledgeable folks on the Sealine forum) so we might have a go at replacing it and see what happens. We'll hear from him shortly as to whether he can do it without removing the drive. The price of the hose is an unknown at the minute. I need to do some further research into it as there seem to be many different types of hoses at very different costs.
In additional news, the marina should be starting work on replacing the leaky gear selector oil seals on both the drives this week. It's an easy job to do but we just won't be able to find the time among the other jobs we have on the go currently. And our propellers should be with us within the next couple of weeks...hopefully!
General Updates Refurbishments and Additions