January 21, 2017
Today has been the first day we've used Bandit for 2017. She was relaunched yesterday and we got up this morning nice and early to begin the cleaning process after a month and a half of maintenance on land. The Tek-Dek teak flooring was in an appalling state and everything was oily and dirty. After leaving all the water to defrost in the marina, we started the power washing. We used the jet wash to blast away all the horrid mud and dirt on the teak flooring on the bathing platform and in the cockpit. The jet wash worked perfectly and we simply let all the water drain away and then wiped down the rest of the cockpit with a towel. It came up okay, but not as well as we had expected. No matter, it looks a lot better than it had done.

Somebody from the marina was out at 0900 this morning breaking up the ice in the marina. They soon cleared the majority of the ice and we were then able to start the engines and head out for our first trip of 2017. The starboard engine started beautifully. Very surprising after nearly two months of not running. The port, however, would not even fire. Not at all. After 10 minutes of trying, we took a look in the engine bay and found that the HT lead was not on the coil. Probably where the mechanics have been working in the engine bay to get the trim hydraulics sorted out for us. We connected it back on and she started immediately. We were then able to set off and we sailed up to Saint Ives quayside where we're now moored up to get some lunch. We tested the bow thruster many times and we are so very happy with it. It's a bit noisy but we sort of expected that. It's far noisier than the Vetus thruster we had in our previously boat, Bliss but it does the job and that's all that matters.

We might stay the night here and head back tomorrow morning in time for me to get to work for 1000. We have the heating going at a toasty 18ºC to keep us warm and we have the new inverter if our laptops need charging. Things are coming together now! Very happy boaters today :) 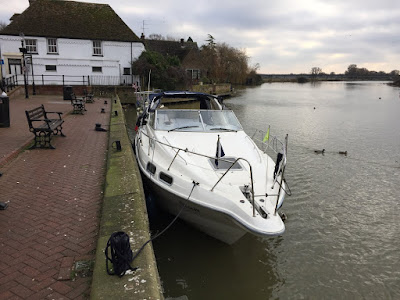