The Bow Thruster Project - Part 7: Running Cables and Other Jobs

December 17, 2016
Today we've been very busy. When we got to the boat, we had a quick check on progress with the thruster. Happily, it's still coming along nicely. It's nearly there now. There's a bit more to do and we can then begin on actually fitting the motor.

The first job we started with was to do with the cabling for the bow thruster. I've run the cable from the control panel at the helm to the front locker where the thruster motor will be installed. This took about an hour and included disassembling everything in order to find a suitable route to the helm where the cable won't be in the way. We ended up following the wiring for the electric Lofrans windlass which ran behind the galley.

After running this cable, it was time to make the decision about the power to the thruster. We had two choices:
1. Run cables to the engine bay and connect thruster to existing (newly purchased) domestic battery. Upsides to this are that we don't have to get another battery and find a place for it. Downsides are that the thruster will not be as powerful and efficient than if we had a new battery at the bow.
or 2. Fit new battery at the bow. Upsides to this are that the bow thruster will produce a lot more power where the cabling to the battery is short. Downsides are that we will still need to link this battery to the engine bay due to charging from the alternator and shore support battery chargers. It also means we have to invest in a new battery and find somewhere to put it and secure it properly.

So, after much research and thought, we decided to purchase a new battery and have it at the bow. This way, the thruster produces as much power as possible. We purchased a 12v marine 120amp/hr battery and will put it in one of the lockers below the saloon. After deciding what we would do, we ran the cabling to the bow from the engine bay. We went with 40mmsq cabling and purchased X2 7 meters (7m of red, 7m of black). The cabling is currently connected to the battery in the saloon locker bins. We will need to fit the motor and run cabling from battery to the breaker knob and then to the motor. This will be done during the week.

The last job of the day was to remove the blue striping from the hull. As mentioned in a previous post, I really did like the stripes on the hull but the one thing that bugged us was the way they were applied. The stripes were not applied straight and looked wavy from a distance. Because of this, they had to go. For the meantime, we will live without stripes but may consider reapplying new ones in the future. Getting them off was easy. I bought down my hair dryer and put it on full fan with the hottest heat. I just carefully heated up the stripe and peeled it off an inch at a time. It was a slow process but worked well. After removing the stripes, I went over that part of the hull with acetone to ensure any remaining glue was removed. After that, I went back over it with some EVM boat cleaner to remove any streaks left by the acetone. There's quite a clear white line where the stripes had been but this should hopefully buff out when we cut and polish the hull in a couple of weeks. We left the glittery Sealine decal for now but will replace it when we can get some new ones. It's going to be an expensive project so new decals will have to wait... 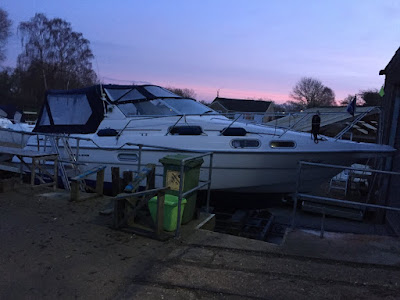 Clearly not a cheap project but it will be worth it.