November 27, 2016
The only downside to being away from the marina is the loss of 240V via shore power hook up. I am forever using my Macbook and the problem is that I cannot charge it while we're out on the river. We had considered fitting a 12v to 240v inverter before but for some reason I thought you needed a huge bank of domestic batteries to make it work. Turns out we were wrong and that we are in fact able to run a smaller inverter from the two 12v 110amp/hr batteries. We've purchased a new 150W 'Modified Sine Wave' inverter to fit to Bandit so I can charge my Macbook while we're out on the river at the weekends or while on holiday. My Macbook charger is only 65W so it's more than capable. The other things is that should we want to run any other 240v accessory, we now have a place to power it.

The unit cost near enough £30 and included the unit itself, a 12V plug socket cable (to plug into a 12V cigarette socket), a crocodile clip cable (to connect straight to the battery), instructions and a spare fuse. The 240V output is through a single three-pin plug socket on the front of the unit and also includes a 2.1 USB socket, power LED, fault LED and a power switch. You can either mount this unit near to the battery and run a cable to a new 240V mains plug somewhere in the boat or mount the unit somewhere where you can simply plug your accessory straight into it, turning it on and off as you need to. We've opted to wire it straight into the 12V circuit, ensuring the cabling is the right size from the inverter to the battery.

I decided to mount the unit in the wardrobe cupboard in the aft cabin as this is where we would usually keep things such as computers, iPads etc while on the move to keep the out of sight and out the way. It's also near to where I sleep so I can have access to the inverter to charge my Mac.

I simply ran some 6 sqmm cable from the battery to the guest cabin and connected it up to our Blue Sea Systems switch panel on the bulkhead opposite the galley. The unit is internally fused so there was no need to add fuses / circuit breakers to the wiring. This was a great and useful addition to the boat and took barely any time or effort to fit and get working. Now to wait and see how well it charges the computer and how much it drains the battery... 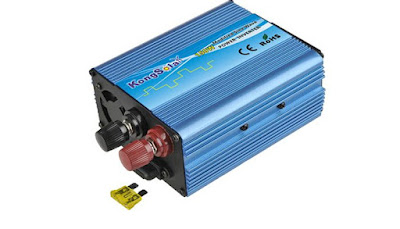 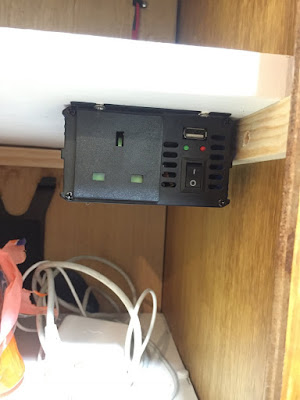