September 05, 2016
Today, we've been tinkering with the engines again. Dad's had his head in the engine bay all morning as we attempt to remove the starboard engine's Prestolite distributor. The last two remaining bits of the starboard engine that we've not touched is now the mechanical petrol pump and the distributor. Everything else we've either proven to function properly or have simply replaced.

In the port-side side engine bay, someone has cut out a circle in the structure at some point previously. We had wondered what on Earth it was but today we've realised. Without this cutout in the fibreglass, you would have to remove the exhaust risers, exhaust manifolds and inlet manifold to remove the distributor. Sealine hadn't thought about removing it and the engine is too far aft that you can't just slide it out. After much swearing and arguing, we ended up using our Dremel tool to cut out an identical clearance hole on the starboard side.

We then removed the distributor and Dad stripped it down. Not only was the air gap entirely wrong (and different at every point) on the electronic advance unit but the weights inside the distributor were so badly rusted. No wonder we weren't getting an even spark to all six plugs... This now explains the overwhelming smell of pure petrol coming from the exhaust on this engine. Maybe this also explains the lack of power? We're not too sure at this point in time.

So what's next? We'll package the distributor up and send it off to a local company that can refurbish it for us. Hopefully, that's the end of our problems. And this time, I think we can say that for sure. 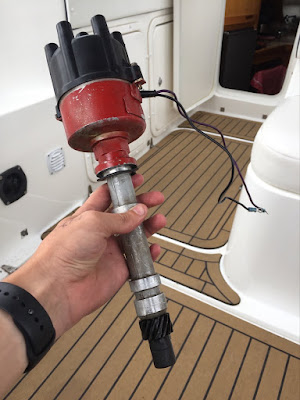