August 07, 2016
Over the weekend, the weather down here has been rather strange. We've had really warm days with beautiful sun and blue skies but we've also had 20+mph winds. Basically, because of the wind, this weekend was a complete right off. The reason being is that we really struggle to get into our mooring if it's windy and we don't like to risk damaging our nice boat or others.

Becuase we've been stuck at base, we've had a chance to crack on through our to-do-list.

On Saturday, Dad gave the entire exterior of Bandit a good clean and polish to give her some shine. I also cleared out the entire anchor locker and gave it a good clean. It looked as if it had been years since someone had cleaned it out and every time we took something out, it was covered in dirt and mud.

On Sunday, we had some bigger tasks to get on with. Firstly, we noticed a large bubble in our Tek-Dek synthetic teak flooring on the bathing platform; a rather big bubble which has only just appeared. We reckon that bit wasn't glued down correctly. We've contacted Tek-Dek and are awaiting any information they might give us. Hopefully they can help us because this bubble looks quite unsightly. 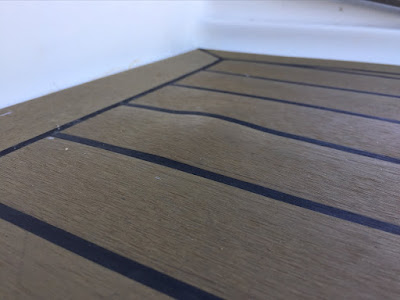 Next, we decided to replace the bulky lights that were in the heads. Main reasons being they looked old fashioned and they took up a huge amount of power as they had halogen bulbs. Interestingly, I found some nice looking touch-sensitive LED lights in our marina chandlery. They're a really modern design and have a little blue LED in the centre that you tap to turn the light on and hold to dim/brighten the LED's. These lights were perfect! We were worried about replacing these lights as we are completely unable to get to the wiring to fit another switch or replace wires etc... These new touch lights went straight in and do the job nicely. The lights themselves are 85lumen so they're plenty bright enough. Another job off the list and the heads is nearly finished now. Just to replace the doors and we're done in there! Yippee! 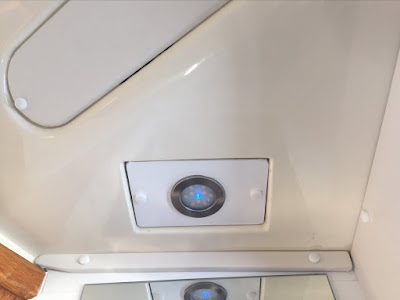 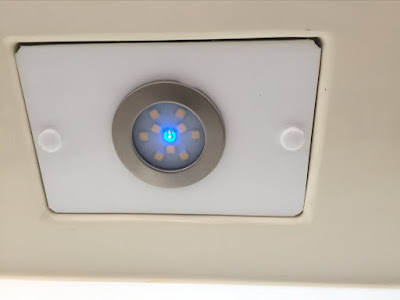 The next job of the day was to layer the front of our fridge in a shiny silver material. Sealine had put a piece of oak, identical to the bulkheads and doors, in the front of the fridge so it matched. We thought this looked old fashioned and instead of replacing the fridge for something modern (and expensive), we'd just redo the front for the time being until we get around to buying a new fridge. We've found it to be quite a challenge as it's nearly impossible to get it perfect with no air bubbles so we'll have to redo it at some point but it'll do for now. It looks far better so it can stay for a while until we have time to do it again. 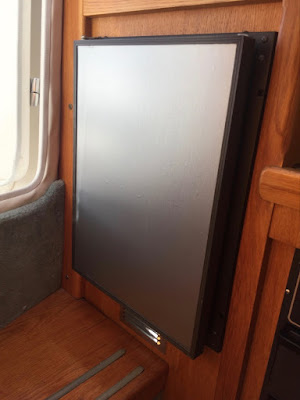 Lastly, we gave the upholstery a quick clean using our EVM boat cleaner and a sponge. We've tried every upholstery cleaner under the sun and this EVM worked better than anything else we've tried. Take a look for yourself... Couldn't be happier with the final outcome a couple hours after taking this picture: 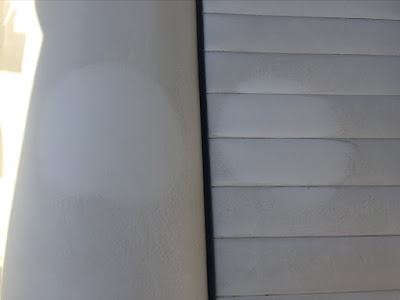