Bandit's Second Trip to Ely: Coming to an End

August 29, 2016
Today was the last day of our ten-day journey. Looking back, we've had a fantastic time and have learnt so much about Bandit. Even after seven months, we're still learning!

The biggest news is regarding the possible re-engine plan for Bandit. We phoned Lancing Marine and instead of paying £15k for two Ford marine engines, we've been quoted an unbelievable £33k. More than twice what we would have spent on re-engining her. So for the time being, we've chucked that idea out the window. If we can get the current petrol engines running as we want them, we'd scrap the idea of diesels anyway.

Now onto our trip. I'm happy to say that Bandit behaved herself for the entire journey, apart from the one little issue we had with the mud blockage in the drive which was very quickly sorted with a 100PSI compressor. Our beautifully running port engine has used less than 1/4 tank of petrol which is far less than we had imagined. Maybe these 4.3l V6's aren't as thirsty as we had thought... The badly running starboard engine, however, has used more than half but we'll get to the explanation shortly.

We've covered a huge amount of miles over the ten days. Far more than I could have guessed, to be honest. It doesn't seem that far but it must have been. We hit a maximum of 21.4mph. Reasons being is that after Ely, there's a three mile long, wide stretch of river with 5meters of depth. We revved up the engines and found the starboard will still only rev to 1500 whereas the port got to 4500+. I put the throttles flat to the dashboard and nearly got the boat planing. This is the fastest we'd been in Bandit but seeing just how much power the engines could potentially produce is another incentive to get the starboard engine running properly. These twin 4.3l Volvo's once produced 205hp per side so we're talking 410hp total. Maybe she's lost a few horses since then but it's still enough to get 30+knots out of her. Plenty enough for us. 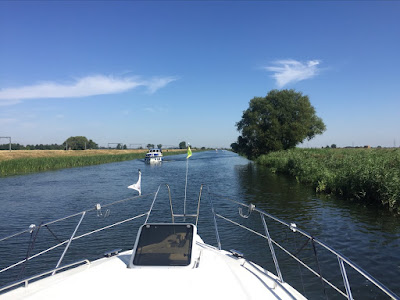 Moving onto the starboard engine. We have spoken to so many different people over the last ten days and those that we spoke to regarding out starboard engine issues have all said to look at the distributor. We've concluded that the distributor isn't providing half the plugs with a good spark. This explains the overwhelming smell of petrol coming out the exhaust and the rough characteristic to this engine. All because the plugs aren't sparking right. So, we'll take the distributor out and send it off for refurbishment at some point this coming month. We'll also throw in a new petrol pump and then there's not a single bit on the starboard engine that's not been replaced. Everything else has either been replaced or refurbished over the last seven months. We've spent an absolute fortune on this engine so it would be nice if it paid off. We'll have to see!

Late Saturday evening while moored at Ely, we began to hear what we thought was thunder coming from the distance. Boy, were we wrong! As this sound came closer, we spotted a huge Sunseeker entering Ely. This thunderous sound turned out to be one of her two engines. It cruised alongside Bandit and fired up its second engine in preparation for mooring down the other end of Ely. The sound was absolutely phenomenal! I could not believe the noise was exiting the rear of this boat. After speaking with the owner, this boat has twin 600hp Detroit diesel engines. A total power of 1200hp!!! The twin exhaust on either side of the transom must have been 1foot in diameter. They were enormous. No wonder it sounded so fantastic. Shortly after arrived a Sunseeker Martinique 36. A beautiful boat but it had nothing compared to the sound of this previous beast. That said, I think the Martinique 36 looked far nicer. 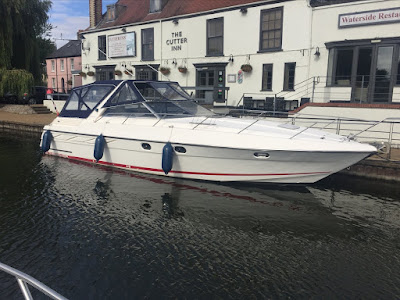 Then it was time to leave Ely for the last time on our holiday. A sad moment really as it symbolises the end of our adventure. Thankfully, we cruised down the Old West River perfectly without any issues this time. It's this river that we clogged the drive with mud. It's been a brilliant trip and we really do look forward to heading that way again later this year. Hopefully, with perfectly running engines so we can really give her a boot full of power. Until then, we'll continue to explore our part of the river as per usual at the weekends.