August 30, 2016
Something that we've had on the to-do-list was replaced all the canopy fittings on the boat. The existing ones were badly corroded and just didn't look neat. The canopy was replaced fairly recently and it's held up very well. It's still tight and the colour hasn't faded. The only thing we've had to do was replace the plastic windows as they had cracked when we folded the canopy up on transportation day back in January.

Not too long ago I removed all the circular snap fastenings and replaced them with new ones and new stainless steel screws, making sure to use sealer on the threads. Replacing those alone made a difference to the overall appearance. That said, I'm quite a perfectionist so I doubt anyone would ever notice. It's a 'piece of mind' thing... And with that, today I purchased 60 new lift-the-dot canopy fastenings and replaced each one. Again, using sealer on all the threads to ensure no leaks arise. 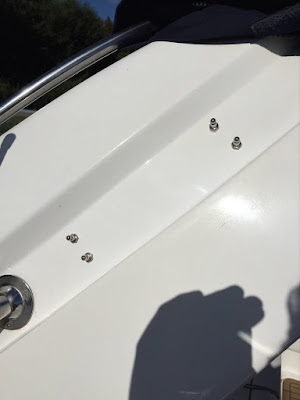 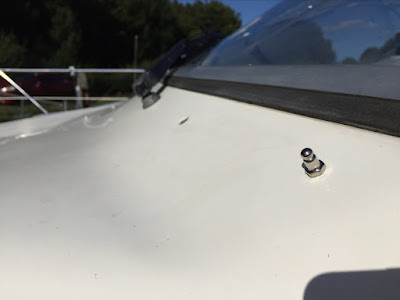 Another thing off the list and it does make the boat look crisper. In fact, where we've modernised and replaced bits on the boat for new ones, we've asked a lot of people how old they think the boat actually is. 80% of people have said the boat looks to be no older than 5 years. Not bad for a 25-year-old boat! Another common comment we get is "if I had £70,000, I'd get myself one too".

Another little task we've been slowly completing is the addition of some new Sealine decals around the boat where we feel they would look nice. We've already put two chrome 'Sealine' decals on Bandit. One on the transom door and one on the rear face of the radar arch. It looks nice when the canopy is completely removed and the one on the transom door always shows. So the newest addition; we purchased two round Sealine emblem decals, 49mm in diameter, and stuck one on the horn mounted on the radar arch and another just beside the cabin door. They were a fiver each but they do look nice. I think they are really sold as a steering wheel centre emblem so when we remove the wheel and refurbish it (rubbing it down and revarnishing it), we'll have the two chrome bezels re-chromed and I'll order another one to put in the centre of the wheel.