July 07, 2016
So today I've been ploughing through our to-do-list yet again. It seems that as one job gets completed, another finds its way onto the list. And I have some more news regarding the issues with our engine...

Firstly, the jobs I've recently completed. They're more of the less important jobs on our list so nothing too massive:
Job one was to scrub every inch of the non-slip on the deck and along the gunwales, as it hasn't been properly scrubbed for a good number of years and a huge number of little black specs were beginning to appear which looked messy and generally uncared for. Needless to say, this took a lot of time and elbow grease to get it clean and back to its nice white colour. Amazingly, I cleaned the whole thing with Cif cream (like you would use at home) and a rough scrubbing brush. I was amazed by how well it worked as it made the decks look factory new! Not bad for a cheap household cleaner. While I was cleaning the gunwales, I gave the windows and sliding window channels a good clean with an old toothbrush to remove any moss and dirt that was making the window hard to slide open and close. It's amazing just how must muck builds up in the window slides. 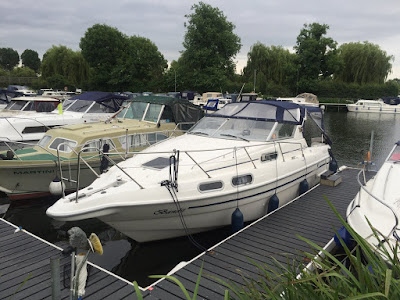 Job number two was to remove the transom door and give it a damn good clean. The panel on the inside of the door was filthy and instead of just washing it with a damp rag, I decided to remove the whole thing and clean all of it. A used some EVM boat cleaner and a sponge to clean the inside panel and then used the Cif cream again to thourally clean the outside gelcoat. After cleaning the outside with Cif, I then wiped it all off with a wet cloth and let it dry. Finally, I added a few layers of our special boat polish to really bring it up and give it a shine. The old white nylon hinges that were fitted to the door were looking really rough so I replaced these with two new ones from a box of them that the previous owner left onboard when he sold the boat to us. While polishing the door, you could see where there was originally a 'Sealine' decal on the rear door. I have no idea why someone has removed all the Sealine decals from the boat but I need to buy some online and stick some new ones back on. Another job to add to the list. 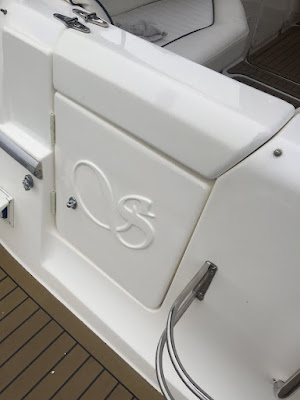 Above the transom door is a hinged GRP block that fills in the top of the transom. Originally, there was a large cushion glued to it which, in our opinion, just got in the way and was quite pointless as you would never use it to lean against. We decided to remove it and screw on a piece of wood finished in white fablon, identical to the material that makes the panel on the inside of the door itself. Personally, we think this looks far nicer and it also separates the two seating areas in the cockpit. 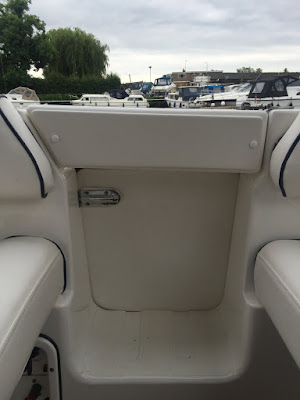 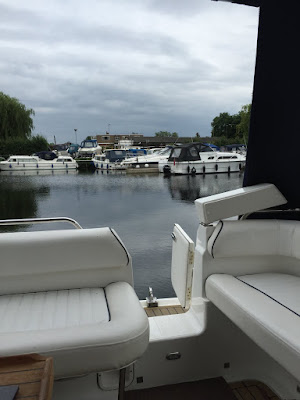 I went to the boat during the week and discovered a rather large hole in the cockpit seating that wasn't there at the weekend. No idea how it happened or when but we need to get it fixed ASAP before it gets any worse. We're always so incredibly careful with everything onboard so it's upsetting that we've managed to do this without knowing what it was. There's a couple of companies local to our marina that specialise in repairing damaged boat uphulstry so we'll have to give them a ring and see what they can do.
Now onto the engine news. We've decided to go ahead and begin doing the work to the engine, starting this weekend. We figured that we might as well get it out the way so we can enjoy our anual holiday away on the boat in mid August. Dad needs to buy several tools that we don't now own. Things such as a tourque wrench, valve spring compresser and other speicalist tools such as those. We're planning to do as much of the work as possible to keep costs to a minimum as we've already spent far more than we planned to on these damn engines. We'll be removing both heads from the starboard engine and then dealing with what ever the problem is. We wont know until we remove the heads. We're hoping it's something as simple as a sticky valve or burnt valve. This means we'd have to replace some inlet and exhuast valves and/or have the heads re-machined. All in all, not a hard job in reality...so Dad says.

We've been discussing alternataves too. If we find an absolute horror story when we remove the heads from this engine, we would concider purchasing a new set of diesel engines as it would be far easier than removing the petrol engines from the boat and spending thousands trying to get them right. At the moment, it's really hard to tell what the furure holds but this is something we would concider.

Only time will tell but we do hope we can get these engines working. Realistically, if we chose to replace Bandit's current 4.3l V6 petrol engines with diesels, we would not buy huge, powerful engines which would be a shame. I was really attracted to the sporty capability that Bandit has when we purchased her and even though they would be so increadably uneconomical at speed, it would be fantastic to have a boat capable of 36 knots when we get her out to sea. Plus, fitting new diesel engines would be extreamly time consuming so we wouldn't be able to use her for a good half year.

More as it happens...
General Updates Refurbishments and Additions