July 31, 2016
This weekend has been brilliant. We've managed to tick a few things off our never ending to-do list but we've also used the boat quite a lot too which is something we've not done too much of lately.

First of all, I finished fitting the lights in the radar arch on Friday. Last weekend, we knocked up a new centre panel for the radar arch, covered it and fitted two of our new LED lights. When Sealine built the 290, they only installed two dim halogen lights into the arch but we knew we wanted to replace every light on the boat with LED and have four in the arch to provide some decent lighting. I'm happy to say it all went well and they look and work even better than we had expected! Now to fit the remaining five down below. 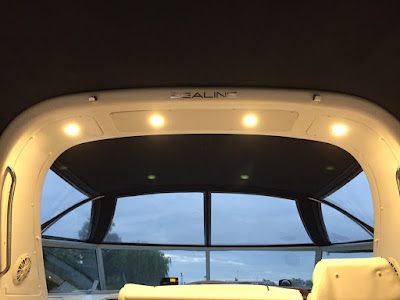 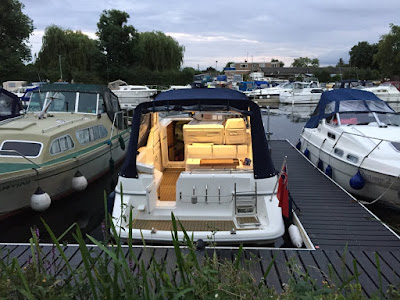 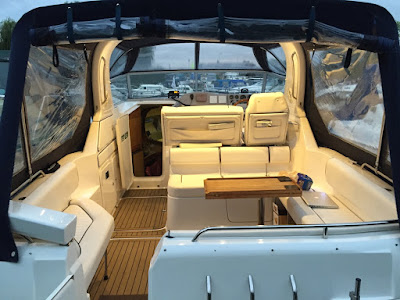 Another task I attempted to tick off the list today was something to do with the electric Lofrans anchor windlass fitted to Bandit. We knew the previous owner had issues with the windlass and we've realised that when raising the anchor, it will keep tripping the 50amp circuit breaker after a few meters of chain it pulls up. We've narrowed it down to three possible things:
1. The warp drum won't come off the windlass so I imagine it is corroded on. Maybe the drum is wedged too far down and is putting excessive pressure on the motor, making it trip the breaker?
2. The connections on the motor or solenoids are badly corroded and need cleaning/replacing?
3. The solenoids are badly rusted so maybe they are overheating or making a bad connection somewhere inernally?
I've drowned the warp drum in WD-40 today so hopefully this loosens it up a bit so I can knock it off gently with a hammer. Or ideally, it might just slide it straight off. I'll have to keep drowning it in WD-40 in an attempt to remove any corrosion. I do hope this is the problem otherwise, it's two new solenoids at 55 quid each.

So, a few jobs taken care of and it was then time to actually use the boat! We decided that we would head downstream a couple of miles to the next marina, the Pike & Eel. We had a lovely meal in the restaurant there and then spent the night aboard Bandit, moored out the front of the restaurant on their visitor moorings. We do like spending the night at the Pike & Eel marina becuase it's in the middle of nowhere so it's deadly quiet at night. In comparison, our marina is beside a main road so it's never quiet. You do get used to it after a while but it was so noticbly quiet at the P&E. It really was lovely. We spoke to a few boaters and some holidaymakers on a hired craft from Cathedral Marina in Ely (about five hours down the river from the P&E).
Sadly, we've still experincing some problems with the starboard engine...damn thing! We are still getting a bad shake at about 1500rmp and the engine will only rev to 2000rmp max. Dad reckons our brand new Rochester Quadrajet carb from the USA wasn't assembled or build correctly. The fuel is just flooding the engine so we're unable to tune it or solve the problem. We do have one years warenty on the new carbs but we still have to pay £100 for postage to get them to the States and then another £100 to get it back to the UK. Ridiculous money for something that should have been correctly assembled in the begining... Anyway, we'll see to that at the weekend.

I hope to get down to the boat during the week to fit the five LED lights for the saloon and galley.
General Updates Refurbishments and Additions