June 26, 2016
This weekend has been relatively productive where our to-do-list is concerned. Me and Dad have blitzed through a number of jobs that needed doing which is great.

For one, we tested the new LED courtesy lighting in the cockpit on Friday night and then on Saturday morning, I cable tied all the wiring up to existing wiring so it's out the way of the engines and other hazards in the engine bay. I spend a good couple of hours tidying up older wiring that hadn't been done properly. Not only is this safer but it looks far neater and out sight. The lights themselves have turned out brilliantly. They really illuminate the three steps in the cockpit when it gets dark so we can actually see where we're stepping. They will come in real handy when we head out for the evening and return to the boat late at night in the dark. Very happy! 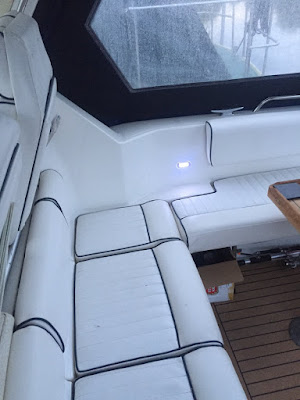 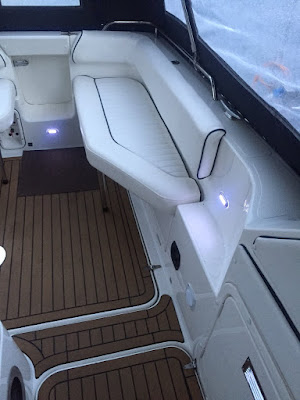 On the subject of lighting, we also fitted two bright LED lights in blue to either side of the bathing platform outside the boat. I've wired them up to come on with the blue lighting in the cockpit so it all illuminates at once. They do look really good when it gets dark and also double as courtesy lights so we can see where we're stepping onto the bathing platform.

Next on our to-do-list was to replace all the canopy fittings attached to the actual boat. They were all clearly original and where Bandit has been at sea for the last 25 years, the salt water had badly corroded them and they looked awful. Gladly, our marina features a huge chandlery filled with almost everything you could ever need on a boat. Today, I was only able to replace the round popper-type canopy fittings on the boat. Most of the canopy is fastened with the 'lift the dot' type stud fastenings and our chandlery doesn't sell the stainless steel version which is what we ideally want. Instead, we'll order them online and fit them next week. This job was one of the most time-consuming ones of the weekend. We had to purchase 40 new round popper fastenings and 40 new stainless screws in total; 30 for the canopy and 10 for the sun pads that fasten to the deck. Then it was a case of unscrewing the old ones, removing the residue of corrosion and yellowness from the boat with Ciff, cleaning off all the previous waterproofing silicone, reapplying more silicone to the boat and the thread of the screw and then screwing our new ones back into the boat. Not a very hard job but it did take a long time and combined with the sun and glare from the shiny boat, it did give me quite a headache. No matter. Half of the fastenings have been replaced and now we wait for our new ones to arrive.

Finally, we had a crack at re-tuning the carburettors as they were clearly still running too rich. Anyone could tell from the smoke and petrol fumes coming from the exhaust. Thankfully, a friend who has a boat in the marina lent us his ColorTune 500 which is an incredible device. It's a tool used to fine tune the carburettor by spectating the colours of the flame on the inside of the engine. The ColorTune is a sparkplug with a clear bit of glass at the bottom. You simply screw it in, use the provided mirror that fits to the end of the spark plug, start the engine and tune the carbs. An orange flame indicates the carb is running far too rich. A white flame indicates the carb is now running too lean and a bunsen blue flame indicates the carb is tuned perfectly. As clever as this ColorTune is, we were unable to use it properly due to the fact it was too large to properly screw into the plug threads on the side of the engines beneath the manifolds. As a result, the carbs are far too lean and the engines keep cutting out due to lack of petrol to the carb. More tinkering to be done. As much as we do like to do things ourselves, I think it's come to the point where we just need a good mechanic who knows exactly what they are doing.

Early this morning, when I went to open the transom gate to get off the boat, I was greeted by a mother duck stood on the bathing platform. She wasn't bothered at all by how close I was to her. She just stood there and looked at me as if to ask where her breakfast was.

Plus, when I was working on Saturday, I drove the boatyard's tug around to our part of the marina and took some good photos of Bandit in her mooring.