A Productive Couple of Days

June 08, 2016
Over the last couple of days, I've been taking advantage of the fact that I have two weeks off from college and have been zooming through a good number of the jobs that have been building up since we got Bandit back in January.

The biggest job me and Dad have accomplished is getting both the port and starboard engines working. It's taken us months but we can finally see the light at the end of the tunnel. We've finally got our carbs on and they are now working as they should. However, there is still some tuning to be done to get those twin 4.3l V6 engines running as smoothly as they should. We've looked at getting something called a 'Colour Tune Spark Plug' which is made specially to tune the carburetor fuel/air mixture. You simply screw it in and watch for a blue or yellow flame. Blue indicating the fuel/air mixture is just right and yellow being far from it...or something like that. Some researching to be done clearly.

We also fitted two new rotor arms to both engines as they were both looking a little burnt out. Better to know they've been replaced and just eliminate them as being any potential problems later on.

Next, we've finally got rid of our 25-year-old tap/shower mixer tap that was in the heads. It had been there since new and in our view, it just looked awful. It needed to go. We spend ages looking on many websites to find a nice, modern replacement. At last, we found one. We cashed out 80 quid and had it sent home as quickly as possible so we could just get it in and forget about it. Removing the old tap, however, was anything but easy. I failed to realise a big nut on the top of the tap assembly and tried for hours to remove the entire grey fibreglass moulded sink unit from the heads in order to get to the bottom end of the tap. I had thought there was a big nut on the bottom holding it on. I was wrong... After giving up on removing the GRP sink unit, I took a minute to think about how it was held on and spotted the nut on the top of the tap. It was frustrating to think I'd cut through all the sealant around the GRP sink moulding, took everything off the bulkheads in preparation to remove it and spend a good two hours doing this to then realise how blind I had been. Anyway, I then spend 20 seconds removing this nut and the tap was free. Cleaned up the hole and stuck the new tap right in. Thank goodness the fitting was the same. After turning on the pressured water pump, water shot out from just about every fitting from the new tap. Dad got down there and tightened everything up and all was then fine. Another job we can tick off our list!

I have also fitted a digital volt meter gauge to the inside of the locker where the Eberspacher heater is fitted. We wanted to have a visible readout of how many volts the Eberspacher was receiving from the battery so if it ever failed to fire up, we could always check if it lack of voltage by simply looking in the cupboard. We had problems before in our previous boat where we had run the battery below 11.8 volts one evening and the Eberspacher failed to turn itself on. At least now, we have that covered. 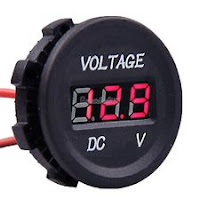 I then spend the remainder of the day running a cable from the top of the radar arch, right through the side of the boat, behind all the bulkheads to the main DC switch panel opposite the galley. Our 12v TV is linked up to the AUX switch on this panel so we can isolate the power going to it. The TV aerial mounted to the top of the arch has a powered booster which was wired up to a constant live, therefore always receiving power and sending out a signal. We didn't like the idea of this so we decided to run the live to the AUX switch to. This means when we aren't using the TV, the aerial isn't sending out a signal. Just another small job off the list which we wanted doing.

The last few tiny jobs consisted of filling the fresh water tank, giving the waterline a wash off with a brush to remove algae and oil staining, cleaning off the outdrives, checking anodes and propellers and generally giving the boat a good hoover and clean internally. It's amazing how much mess and rubbish accumulates over the day.

At some point this week, I'll be helping out our friends in their Sealine 290 Ambassador to fit some blue LED lighting in the cockpit and to do several other wiring jobs. I pretty much know these Sealine's inside out now after doing so many jobs to Bandit.

The weekend will be reserved for relaxing I think... That's what boats are for isn't it? I've almost forgotten at this point.
Refurbishments and Additions